~ Qiu Yue is alive but he now hates Chun Hua? ~

That night, Chun Hua dreamt about the day’s events, waking with a start when she saw the look Qiu Yue had given her. She then takes her Ice Silkworm Pearl to the pavilion to bask in the moonlight, clutching it to her chest when it glowed slightly, hoping that Qiu Yue was alive and well.

Morning soon came around and Xiao Bai brought over a cape to cover Chun Hua who had fallen asleep at the pavilion. After checking the mark on her palm, worry fills his eyes but he gently places Qiu Yue’s hairstick in her palm before turning to leave. Chun Hua stirs at the motion and calls out “Shang Guan” before realising that it was Xiao Bai and asking why he had come. Even though he was dejected, Xiao Bai schools a small smile on his face before turning to face her. He replies that he had brought clothing because the weather was cold and when he saw that she was just staring forlornly at the hairstick, he adds that Qiu Yue had given it to her.

At this, Chun Hua starts to reminisce the times she shared with Qiu Yue that involved the hairstick – The first time she saw his fuzzy figure. The time he had pulled out his hairstick to gift it to her, causing his hair to cascade down. The time they were in the Ice Gorge together where she had “threatened” to kill him with the hairstick. The way he had looked at her as he pulled out his hairstick and flung it towards her after Xiao Bai had injured him.

“He hates me, I hurt him.” Chun Hua tells Xiao Bai and he questioned if she really missed him that much. As she tinkered with the hairstick in her hands, Chun Hua lamented that she wouldn’t get to see him anymore. Xiao Bai reassured her that Qiu Yue was highly skilled and would be fine but he worried about her poison, vowing to treat her well to the best of his ability.

Back at Qian Yue Cave, Qiu Yue finally regains consciousness but he wakes with a start when he recalled what had happened. Brushing off Ye Xing Zhu’s concern, Qiu Yue became angry when she brought up Chun Hua and he shot his hidden weapon at her, sending it narrowly whizzing past her in a warning. With a cold demeanour, he reveals to her that it was ridiculous that he would keep her by his side just for her to repay a debt of gratitude for saving her life. It was only because he knew that she had affections for him. What he had said about appreciating her ability to gauge people’s mind were also nonsense, she had gotten to where she was with her own abilities. When Ye Xing Zhu thanked him for recognising her worth, telling him that she was willing to serve him for the rest of her life, Qiu Yue sighed. Qian Yue Cave’s leader will be replaced, some ruled with fear, some gained victory effortlessly, some killed all the former subordinates while some kept all the power for themselves. When a day came that she had to make a choice, he wanted her to preserve Qian Yue Cave’s reputation, not to protect past affections.

Meanwhile at Feng Ming Manor, the four youths were discussing the current situation. Qian Yue Cave’s forces and the good sects had gathered west and east of Ba Xian City respectively. Coincidentally, Ba Xian Residence was right in the middle of the conflict and Cai Cai contemplated the possibility that Pu Er’s invitation hid a plan to incite a fight. Leng Ning suggested that they not attend the banquet but Xiao Bai insisted that they had to attend in order to expose Pu Er’s scheme. Despite the other three’s misgivings that they didn’t have any evidence to proof that Pu Er was Mr Shi, Xiao Bai was blinded by his haste to find Qiu Yue and decided that they should act first.

At the same time, Chun Hua had ventured into the forest where she last met with Qiu Yue. Finding a red spot on the ground, she crouches down and reaches a shaky hand towards it. Her Ice Silkworm Pearl suddenly glows and she immediately stands up, looking around frantically as she called for Qiu Yue. He never showed himself and Chun Hua hollered that she will forget him and live happily by herself. She could say whatever she wants but her Bai Hua Calamity soon flared up and she ends up crouching on the ground with a hand clutched to her chest.

Chun Hua later returns to Feng Ming Manor and bumps into Li Yu at the entrance. She informs him about Pu Er’s plan to lace the food with Ruan Jin Powder and asks him to relay this to Xiao Bai. When Li Yu comments that Xiao Bai was lucky to have Chun Hua as his wife, she voiced that she was dying soon and he reassured her that he had been searching through medical books for a cure and should be able to find one soon, revealing that Xiao Bai had also been pressing him for a cure. Before he left, Li Yu informed Chun Hua that he would have a guest at the teahouse the next day and invited her to come along if she was bored.

The next day, Chun Hua took up Li Yu’s offer and sat at a table by herself while Li Yu entertained his guest. Li Yu later came by her table for a moment and commented that his guest, Zhou Gongzi* was acting different from his usual demanding and lecherous self. Later, Chun Hua’s gaze drifted to Zhou Gongzi and the realisation dawned on her that this Zhou Gongzi was actually Qiu Yue who had altered his looks and voice. Chun Hua stood in a daze even as Li Yu came by her table and as ‘Zhou Gongzi’ walked past her without sparing her a glance. When she finally snapped out of it and chased after him, he was nowhere to be found. Overwhelmed by her feelings for Qiu Yue, her Bai Hua Calamity flared up again.

When Chun Hua regained consciousness, she was back at Feng Ming Manor and Xiao Bai was at her bedside, with Cai Cai and Li Yu standing nearby. When Xiao Bai asked why her poison had spread when she had just visited a teahouse, Chun Hua avoided the question and instead asked Li Yu about the guest he had met. Li Yu tells them that Zhou Gongzi came from Ba Xian City’s most well-known timber family who also supplied the wood for all of Pu Er’s fittings. Out of the blue, Zhou Gongzi had arranged a meeting with him and asked whether the wood at the residence was alright. When he later saw that Zhou Gongzi’s eyes had drifted to Chun Hua, Li Yu introduced her and spoke a little about her poison but Zhou Gongzi had coldly replied that she had capable people around her and that he should instead focus on how to help Pu Er. Zhou Gongzi then dips a finger into his teacup before writing “three” on the tablecloth. Cai Cai was dumbfounded as to why Zhou Gongzi would bring up the pillars repeatedly and Li Yu adds that as per Cai Cai’s instructions, he had checked every corner of Ba Xian Residence but had found nothing. Chun Hua ponders whether Qiu Yue had done this to give Feng Ming Manor some clues or if it was to widen his net and do an even larger ruse.

Chun Hua came out from her thoughts to see that the rest were looking at her worriedly so she pretends to have been bothered by the bitter painkiller that Li Yu was going to prescribe her. Xiao Bai holds her hand in his, promising that he wouldn’t let her die. Hearing this, Chun Hua smiles wistfully as she recalls the time Qiu Yue had promised something similar.

Later, Chun Hua was combing her hair when Xiao Bai came by her room. He first helped her to comb her hair but she soon took back the comb from him. When Xiao Bai told her that he was worried for her in regards to that night’s banquet but also worried to leave her alone in her room, Chun Hua told him that she would follow him to the banquet. Xiao Bai then grasped her hand, taking a look at the dark red flower on her palm as he asked her with a voice barely above a whisper, whether she could for her own sake, forget ‘him’ and be together with him. Hearing this, Chun Hua tried to retract her hand but Xiao Bai tightened his grip.

* Gongzi is simply a title, similar to “Mr” but not exactly

The new Qiu Yue is so unfeeling and scary and the gaze in his eye nyahhh
Also, why is he just revealing all his ‘lies’ to Ye Xing Zhu? It almost seems like he’s pushing her away…?
Qiu Yue’s new look as Zhou Gongzi…it’s cute, though…is it just me or he looks chubby in some angles? Cue non-chubby version ~ 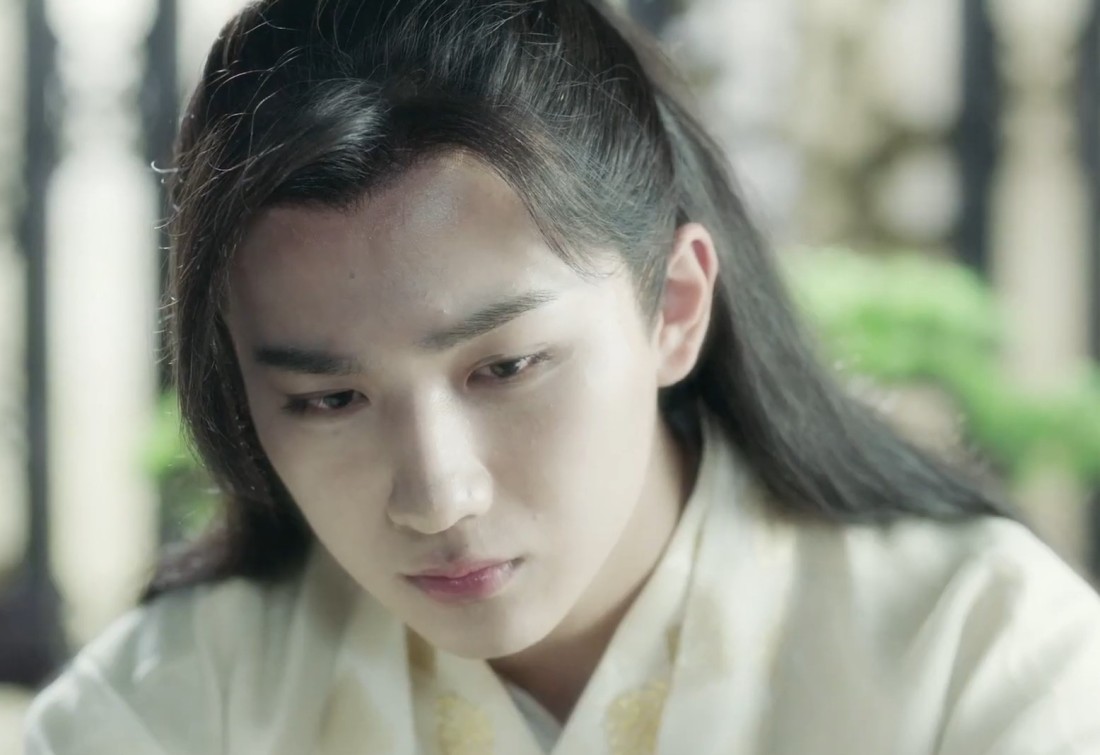 View all posts by sugakookie